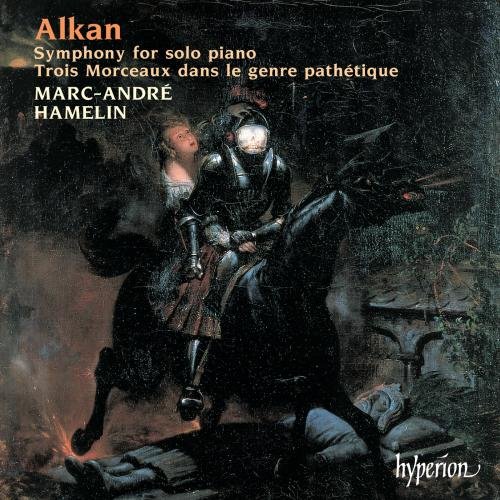 Alkan's one of music's originals, a relatively neglected composer valued for his highly original, often visionary keyboard works accessible only to the most skilled virtuosos. Marc-AndrÃ© Hamelin certainly fills that bill and almost outdoes himself on this disc, playing with breathtaking virtuosity and imaginative insight. The Symphony for solo piano is just a four-movement work of symphonic scope and color. The opening Allegro is a tightly structured drama, followed by a Mahlerian funeral march, a vigorous scherzo, and a final blistering Presto dispatched by Hamelin with almost supernatural ease. The Symphony was part of an even bigger work, the Opus 39 Ãtudes, whose 12 pieces include Alkan's best music. The three brief pieces that follow have strong attractions, deep spirituality prime among them. The final three pieces from his early Opus 15 set exemplify Alkan the Romantic. Again, Hamelin makes light of their technical difficulties, while shaping them sensitively. Notable are Le vent, where the right-hand runs make you hear the whistling wind and Morte, another powerful funeral march. Vivid sound captures Hamelin's nuanced playing, helping to make this disc a must-have for pianophiles. "i"--Dan Davis

"h3"Review "p"Studies Nos. 4-7 of Op. 39 (12 Etudes dans tous les tons mineurs) make up the Symphonie for solo piano (which lasts 26'06"). It is a more Classically conceived and technically less daunting affair than the monstrous Concerto for solo piano (Nos. 8-10 of the same opus), but the opening Allegro is not for the faint-hearted. Here and it is the only movement on Hamelin's disc to which this refers bass figures sound over-resonant and less crisply focused than elsewhere. The music of the Funeral March and Minuet look forward to Bruckner and Mahler, wonderfully characterized by Hamelin, while the finale, with its 'inhuman metronome mark', is indeed 'like a wild ride in hell' (Raymond Lewenthal who, impressive as are Ronald Smith and Jack Gibbons, is the only pianist to rival Hamelin in this work). The Trois morceaux (lasting 29'56"), three studies that are among the earliest of Alkan's published solo music (1837), are indications of the provocative and original voice that was yet to mature fully. The first, entitled 'Aime-moi', with its Chopinesque themes but Alkanesque figurations, requires, according to Ronald Smith 'expertise disproportionate to it effectiveness'. 'Le vent', which follows, was once the only widely known piece by Alkan, a favourite of Harold Bauer whose Duo-Art piano roll is technically proficient but musically wanting. Hamelin turns its pyrotechnical chromatic runs and sombre theme into an atmospheric impressionistic poem. Finally comes 'Morte', perhaps the most extraordinary piece on the disc, its opening pages presaging late Liszt and Ravel's 'Le gibet' 'a vision of Mussorgskian power and Ives-like daring' (Smith) as ecstatic as anything Liszt conceived, its final pages stunningly executed by Hamelin, as chilling as they are memorable. Sandwiched between the Symphonie and Op. 15 are three shorter works: Salut, cendre du pauvre! ('Hail, ashes of the poor!'), a touching elegy, the declamatory Alleluia and Super flumina Babylonis, an extraordinarily effective paraphrase of Psalm 137 ('By the rivers of Babylon'). This quite exceptional recording confirms Marc-AndrÃÂ© Hamelin as the greatest living exponent of Alkan's music (not that his two earlier discs of solo works left much room for doubt). His musicality, temperament and phenomenal technique seem ideally suited to the composer's exacting, quirky, fantastical demands, performances that corroborate Alkan as a visionary genius of the piano on a par with Chopin and Liszt. Hamelin offers spontaneous, inspirational playing in which the architecture of each work, phrasing, astonishing accuracy and articulation, and the use of the full tonal resources of the instrument combine to illuminate these extravagant scores in their full colours as never before. Jeremy Nicholas -- From International Record Review - subscribe now